Showing posts from January, 2007
Show all

Time Of Year For Marmalade 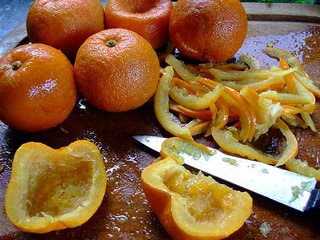 At Pottery House B&B all our jams and preserves served with breakfast are home made. In fact strawberries, raspberries and blackberries we pick ourselves. This time of year, January/February, is the time the Seville oranges are in season, so it's time to make marmalade and today was the day. I read a recipe somewhere that suggested that adding a tablespoon of black treacle to the mix just before putting in jars gives a lovely dark golden colour, so I gave that a try. Here's the recipe I used, it makes quite a lot of marmalade so you probably want to half it for home use. 3kg Seville Oranges (We used organic from Waitrose) 4kg sugar 8 lemons Put the oranges in a large pot with enough water so they float. Bring to the boil and then simmer for 1 - 1.5 hours. Put a piece of muslin over a bowl. Cut each orange in half, put the pith and pips into the Muslin, and then slice the orange into strips and put in your preserving pan (or large heavy bottomed saucepan). Add the ju
Post a Comment
Read more

Kestrel Outside the Front Door

January 22, 2007
Last night I went out in the sleet/snow, to put an item out for collection in the morning. As I opened the front door I heard something drop to the ground behind the bay tree that sits just outside. I went and fetched my torch and to my amazement it was a female Kestrel. I guess she was using the bay tree as a sheltered roost, so I let her be. We often seen Kestrels in the garden dive-bombing the smaller birds, but I've never seen one so close before.
1 comment
Read more

January 22, 2007
We had Long Tailed Tits in the garden yesterday, on the nut feeder outside the kitchen window. Although we've seen them a few times in the area, usually in flocks up in the trees, this is the first time we've seen them in the garden. Must be a shortage of food, especially at this time of year.
Post a Comment
Read more
More posts