October 03, 2006
Before this all kicks off I thought I'd give you an overview of what I intend doing. I know I posted the diagram, but now I'll show you the real location.

Now if you've had a look at the Pottery House web site you'll have seen the front of the house, the flowers and gardens, the view of Loch Ness from the house and even the bedrooms and bathrooms. Now I'm going to show you a view of Pottery House that guests do not see. 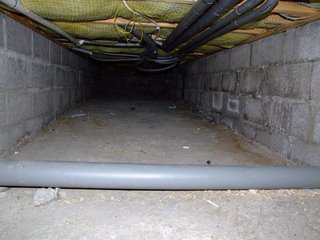 This is what it's like under the house, a maze of passageways with pipes, wires and plumbing. This is where I'm going to create my water recycling project (or maybe a big flood with two empty tanks sitting in the middle of it)!! 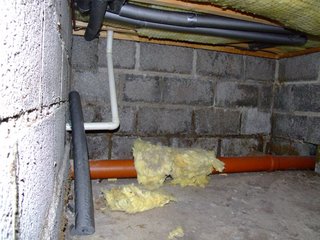 Do you see the white pipe in this photo. Now that's the all important pipe, it is the drain pipe from the washing machines in the utility room.

At least I think it is, I'm fairly sure it is. Maybe I should put one of the washing machines on a very hot wash then hold this pipe as the wash finishes.

This pipe passes through the wall into the next section, photo below, where it joins a main sewer pipe. It's the lower of the two white pipes in the second photo. 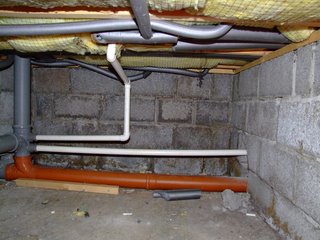 So ALL I have to do is

1) install the two tanks
2) cut the pipe in the first photo and put it through the higher hole in the wall (which is clearer in the second photo), into the first tank.
3) join the two tanks together with a section of pipe
4) Put an over-flow pipe from the second tank back to where the current pipe joins the main sewer.
5) Run a pipe, with a pump, to a tap on the outside wall.

Now number 5 is a whole issue all on it's own and I'm not even sure how I'm going to achieve this, the least of the problems being how do I put a pipe through a breeze-block wall. So I'll come back to that bit later.


By the way if your looking at this project thinking "Why on earth is he doing that" or "OMG: don't do this", please post some comments, I'm making this up as I go along, so I could do with all the help I can get. 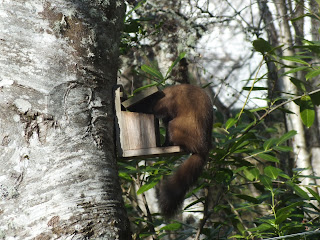